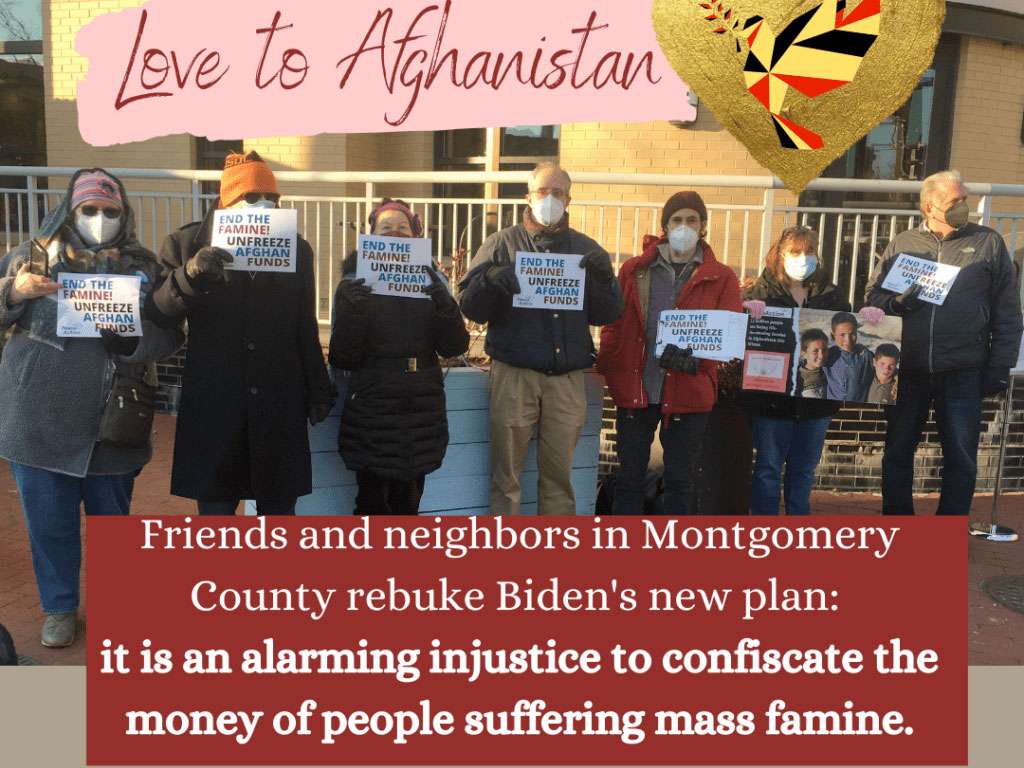 Posted at 12:16h in Uncategorized by draindrop 0 Comments
1 Like

The UN is reporting that hunger and famine in Afghanistan could kill more civilians this
winter than the entire 20-year Afghanistan war. The famine is also creating a massive refugee crisis, as people flee the country to seek food security. Economists agree that the primary cause of the famine is the collapse of the banking sector, and that the banking collapse is due to U.S. sanctions and the freezing of Afghan assets by the U.S. and others.

President’s Biden’s decision on February 11th to steal Afghanistan’s money that had been deposited in the Federal Reserve, giving half to the 9/11 families and the rest for its own, unclear process of “humanitarian aid” will lead to a continuing famine and an inability for Afghanistan to recover. All those funds belong to the people of Afghanistan, not the U.S., and the Afghan Central Bank needs the money in order to re-start the economy so that Afghans can become self-sufficient again. Providing it to the Central Bank does not mean that it will go to the Taliban.

On Valentine’s Day, MD Peace Action held four vigils around Maryland, to express our love for Afghanistan and to demonstrate our shock and dismay at the Biden Administration’s decision. We were in Annapolis, Takoma Park, Baltimore and Columbia. Some of us fasted for the day, as a small demonstration of our solidarity with the people of Afghanistan.

We were drawing attention to U.S. policies that are causing one of the greatest humanitarian crises in history. Haven’t we done enough terrible things to this poor country? Do we really need to starve children and create a massive refugee crisis?

If you thing so, please sign this petition to Congress and the President. 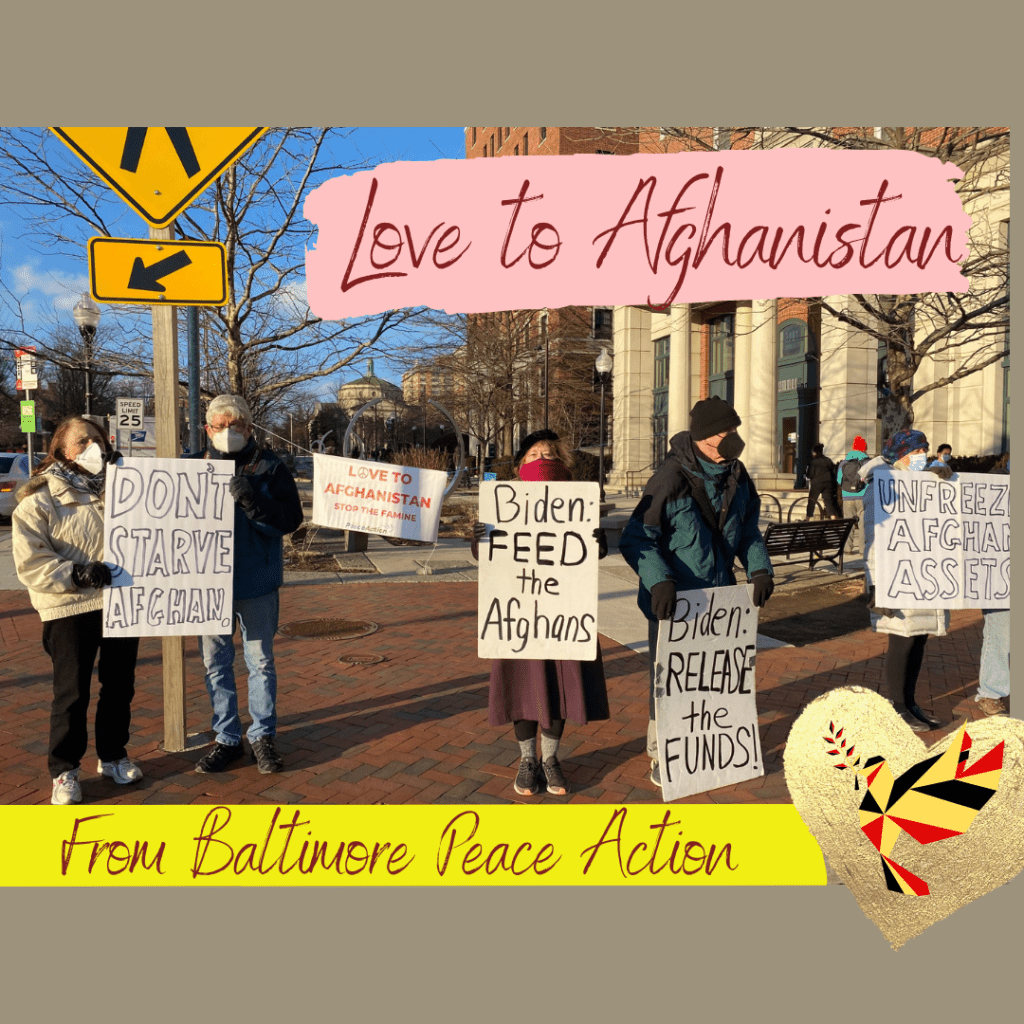 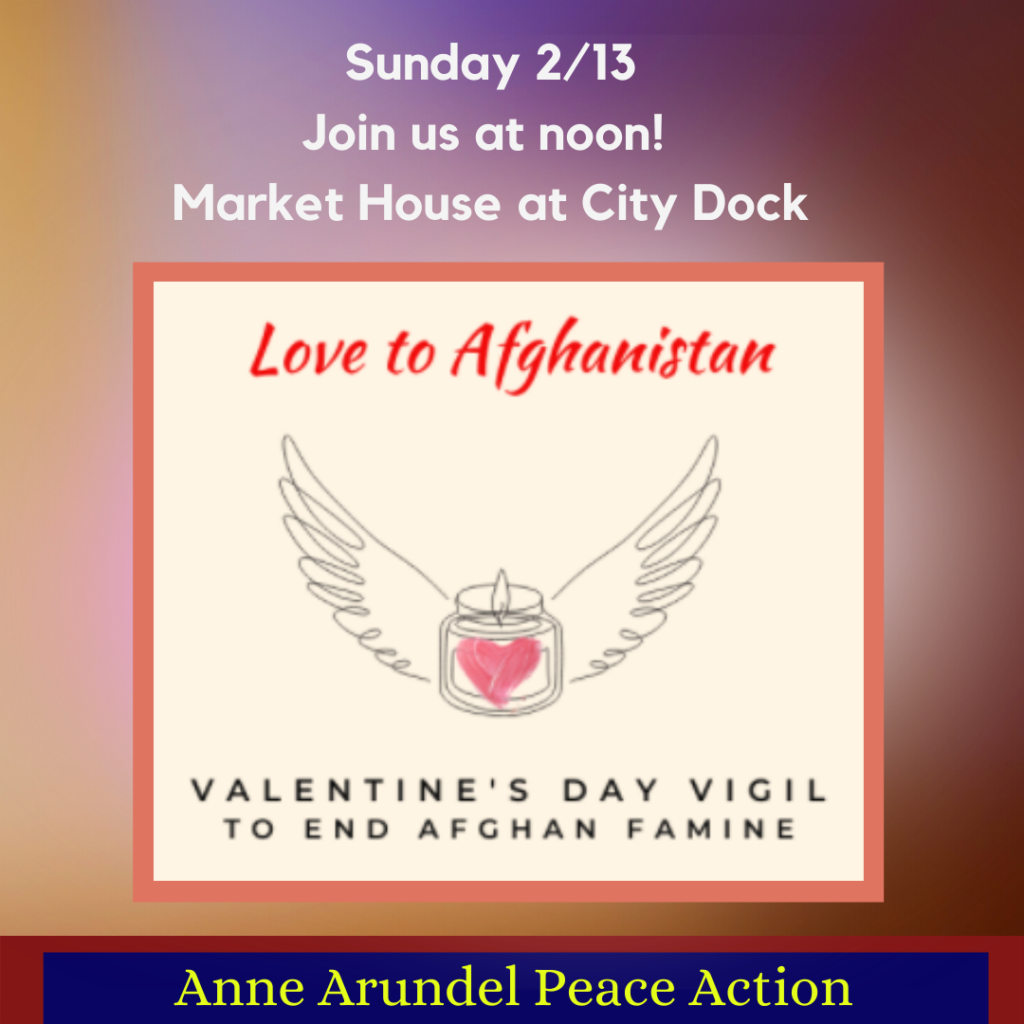 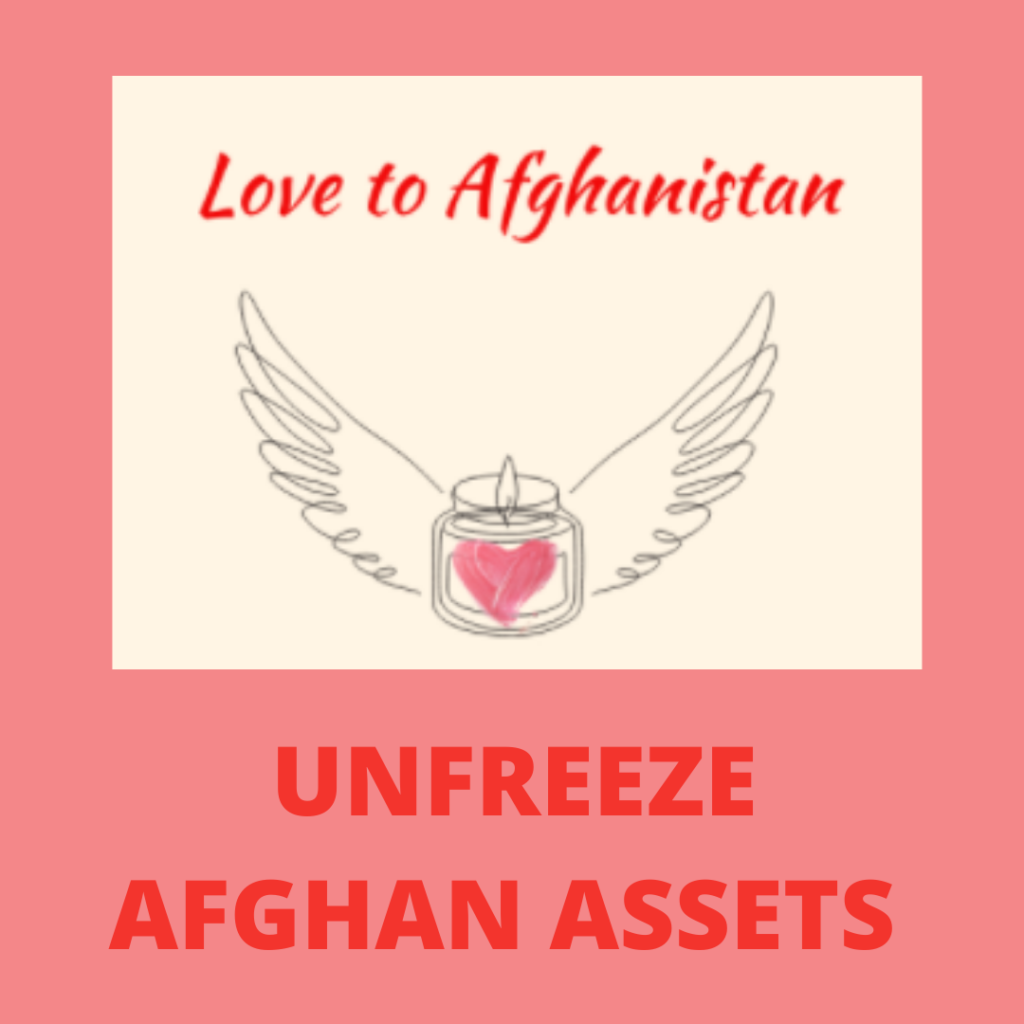 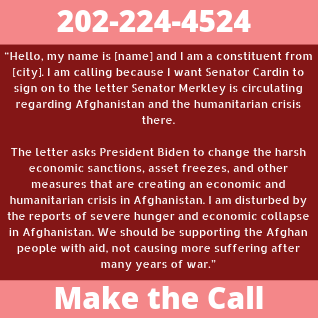 Congressional letter from Reps. Jayapal, Jacobs, and Garcia, demanding President Biden to address mass famine and to do the right thing with Afghan assets:

We strongly support your decision to bring the longest war in the history of our nation to a close. We are grateful for your administration’s efforts to evacuate Afghans that worked with coalition forces and other at-risk groups, and we fully support your initiatives to continue and strengthen that assistance for those seeking relief.

As you transition into a new phase of our relationship with the country and people of Afghanistan, we stand with Afghan leaders, American allies, and humanitarian experts in urging the United States to avoid harsh economic measures that will directly harm Afghan families and children. This means conscientiously but urgently modifying current U.S. policy regarding the freeze of Afghanistan’s foreign reserves and ongoing sanctions.

United Nations officials are warning that millions of Afghans could run out of food before winter, with 1 million children at risk of starvation.[1] “After decades of war, suffering and insecurity, [Afghans] face perhaps their most perilous hour,” said UN Secretary General Antonio Guterres, who implored countries “to take action and inject liquidity into the Afghan economy to avoid collapse.”[2] World Food Programme surveys indicate that 95 percent of Afghan households are not consuming enough food.[3] Afghanistan will face “universal poverty by the middle of next year,” with the poverty rate expected to rise from 72 percent to as high as 98 percent.[4] Afghanistan’s economic pain and humanitarian collapse both threaten to trigger a new refugee crisis throughout the region.

For these reasons, we are deeply concerned by the continued U.S. freeze of Afghanistan’s foreign reserves, the International Monetary Fund (IMF)’s choice to deny Afghanistan access to special reserve assets intended to help developing countries alleviate the impact of the pandemic, and U.S. sanctions’ impacts on Afghanistan. The U.S. confiscation of $9.4 billion in Afghanistan’s currency reserves held in the United States is contributing to soaring inflation and the shuttering of commercial banks and vital private businesses, plunging the country — which relies overwhelmingly on imports that require hard currency — deeper into economic and humanitarian crisis.

Current and former Afghan central bank officials appointed by the U.S.-supported government advocate for providing Afghanistan’s central bank access to hard currency reserves.[5] We urge you to consider these proposals, supported by private sector associations such as the Afghan Chamber of Commerce and Investment and the Afghanistan Banks Association, to quickly ease restrictions on the country’s access to reserves.[6] We also urge you to work with the IMF to similarly allow access to the emergency financing that was recently allocated for Afghanistan.

No increase in food and medical aid can compensate for the macroeconomic harm of soaring prices of basic commodities, a banking collapse, a balance-of-payments crisis, a freeze on civil servants’ salaries, and other severe consequences that are rippling throughout Afghan society, harming the most vulnerable.

We deplore the new Taliban government’s responsibility for grave human rights abuses, crackdowns on civil society and repression of women and LGBTQ people. However, pragmatic U.S. engagement with the de facto authorities is nevertheless key to averting unprecedented harm to tens of millions of women, children and innocent civilians. Punitive economic policies will not meaningfully weaken Taliban leaders, who will be shielded from the direst consequences, while the overwhelming impact of these measures will fall on innocent Afghans who have already suffered decades of war and poverty.

It is also important to clarify that the overwhelming majority of reserves returned to the central bank of Afghanistan will be used primarily to purchase imports by Afghanistan’s private sector, which comprises the dominant share of Afghanistan’s economy. By denying international reserves to Afghanistan’s private sector—including more than $7 billion belonging to Afghanistan and deposited at the Federal Reserve—the U.S. government is impacting the general population. We fear, as aid groups do, that maintaining this policy could cause more civilian deaths in the coming year than were lost in 20 years of war.[7]

We are also deeply concerned that sanctions against Taliban officials now in charge of governmental functions are creating a chilling effect for financial institutions and aid organizations serving Afghanistan. While we appreciate recent U.S. moves to enable a number of these entities to continue to operate in Afghanistan,[8] we ask that you provide more explicit reassurances regarding permitted activities, including by providing long-sought “safe harbors” or “comfort letters” to both U.S. and non-U.S. based entities operating in the country.[9]

There is no doubt that the Taliban’s new authority presents a serious challenge to human rights, including the rights of women and girls in Afghanistan. The protection of those rights must continue to be among our very highest priorities. Your recent direct talks with Taliban leaders in Doha and open lines of communication may be one of the best ways to influence their behavior and protect both vulnerable Afghans and U.S. interests. Ongoing engagement with the Taliban to coordinate access to urgently needed hard currency can provide the necessary leverage to secure human rights improvements.

Finally, a failure to maintain open communication not only risks humanitarian devastation but also directly threatens U.S. national security interests. An economic collapse could result in the Taliban’s retrenchment from U.S. engagement and cooperation on counterterrorism, create ungoverned spaces, and enable resentment against the U.S., producing fertile ground for groups like ISIS to gain strength and use the territory as a staging ground for plots against the U.S. and its allies. U.S. economic policy should not undermine the national-security imperative of seeking stability in Afghanistan, and instead should minimize the risk of threats emanating from the country.

“We need to separate the politics from the humanitarian imperative,” urges World Food Program country director for Afghanistan Mary-Ellen McGroarty. “The millions of women, of children, of men in the current crisis in Afghanistan are innocent people who are being condemned to a winter of absolute desperation and potentially death.”[10] We stand ready to work closely with you as you expeditiously review current U.S. policy in light of the extraordinary economic and humanitarian risks confronting the people of Afghanistan. We respectfully ask that you consider the aforementioned measures to protect vulnerable civilians and U.S. national security interests.