See some examples of our activities over the past year:

Our bi-monthly action alerts generated 3,763 emails to elected officials this year.We organized multiple lobby visits with members of Maryland’s Congressional delegation on topics that included ending the forever wars, cutting military spending, reengaging with Iran on the nuclear deal, urging cosponsorship of bills aimed at  reducing the threat of nuclear accidents or war (such as “No First Use” and cutting spending for land-based ballistic missiles), ending the sale of excess military equipment to local police departments, and more. One example of the result of this work is that 6 of Maryland’s 8 members in the House of Representatives have now cosponsored a bill to repeal the 2002 Iraq “Authorization for the Use of Military Force,” which has been used by presidents from both parties as legal justification for multiple wars and conflicts.

We have worked to secure county-based support for the Back from the Brink campaign designed to reduce the threat of nuclear weapons.  For example, we secured a resolution in the Montgomery County Council for this campaign, and then one in Frederick City. We are actively working in Prince Georges, Howard, Baltimore and Frederick Counties on similar county council resolutions. Other local government work include the annual “Peace Month” organized in Prince Georges, in collaboration with the County Council, and the Frederick chapter’s work with City Council members in organizing two local on-line programs on nuclear weapons and on militarism.

We organized several webinars:  the history of African American activism on nuclear weapons, how to prevent a coup (prior to the election), a reflection on Maryland’s “Fund Our Communities, Not the Pentagon” campaign, the military’s role in poisoning the Chesapeake Bay through its use of dangerous foam, and a retrospective on the Afghan war. The Prince George’s chapter has sponsored monthly films via Zoom, and our Howard County chapter leader appeared in an hour-long pod-cast addressing  nuclear weapons, accessed by over 1,000 people in Maryland.  Chapters in Montgomery and Frederick have made educational presentations to Rotary Clubs and other groups.

We work in coalition.  Examples include collaboration with the Muslim Voices Coalition in its efforts in Montgomery County to gain Muslim representation on racial justice committees; the Prince Georges chapter’s alliance with Democratic Socialists of America; and a partnership with the Maryland Poor People’s Campaign. We are currently organizing a new, broad-based coalition designed to dramatically reduce military spending and repurpose those funds to protect the climate and address systemic racism, economic inequality, and the immigration crisis.

We are trying to engage young people, for example, through the Anne Arundel chapter’s annual state-wide essay contest for middle school students and a Youth Peace Video Contest in Montgomery County.

We organized multiple public protests. Here are just a few examples: several at the Port of Baltimore by our Baltimore chapter to try to prevent ships from loading weapons to be sent to Saudi Arabia for use on the people of Yemen; one in Annapolis, to protest Congressman Anthony Brown’s leadership role in securing House signatures on a Congressional letter designed to make it harder for the U.S. to reengage with Iran—and other protests at the offices of Representatives Mfume, Ruppersberger and Senator Cardin, in opposition to their signatures on this letter; celebrations of the passage by the UN of a treaty outlawing nuclear weapons; and several protests on the position of the U.S. in the recent violence between Israel and Palestine.  The Baltimore chapter vigils every Tuesday at Johns Hopkins University, in opposition to that university’s work on nuclear weapons research.  The protest at Rep. Brown’s office drew extensive coverage in local newspapers.

Our Montgomery County chapter serves as state-wide organizational coordinator for the “Deadly Exchange Campaign” focused on ending military-style training of Maryland police by the Israeli Defense Forces–training courses that happen through occasional, special visits to Israel by local police.

We organized a campaign in opposition to the MD Guard being sent to DC to tamp down on racial justice protesters.  This campaign included street protests, solicitation of emails and phone calls to Gov. Hogan’s office, letters to the editor of local papers, and a paid social media series targeting Maryland National Guard members who had been deployed to DC.

We have had several letters published in local newspapers by our core leadership and have regularly used social media to send out information. Since February, when the social media campaign began, we have sent out over 500 postings, reaching thousands of individuals. 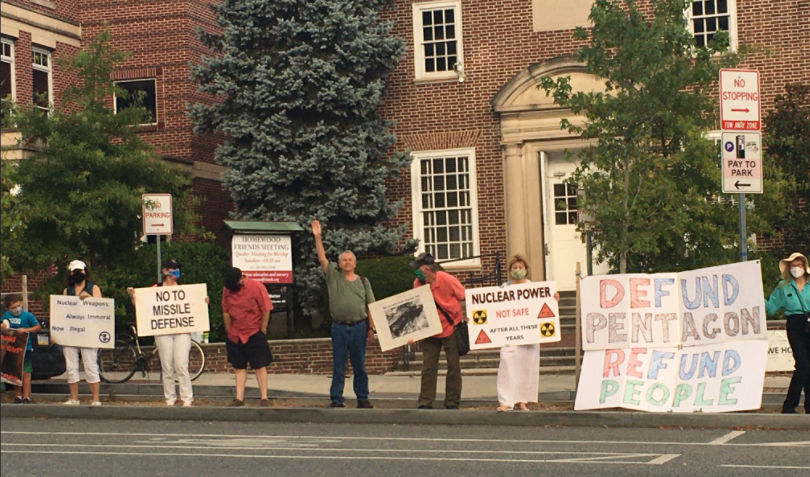